Peter O’Sullevan House, on the site of the British Racing School in Newmarket, houses state-of-the-art rehabilitation and fitness facilities for injured jockeys.

Built by the Injured Jockeys Fund, the centre has treatment rooms, hydrotherapy pool and a gym; meeting and educational facilities for British Racing School students; a multi media and communications room and also serves as the Fund’s head office. Construction of the centre was completed in 2018 by contractor RG Carter at a cost of about £6m.

Harrison Group Environmental was commissioned to carry out a desk study and geotechnical investigation to provide engineering data for construction of the new centre.

The desk study confirmed the site was within the perimeter of the World War Two RAF Snailwell airbase, which meant there was a risk of unexploded ordnance [UXO] being present. As a result, magnetometer scanning was carried out at investigation locations before work began, to ensure each was clear of UXO.

Environmental testing was undertaken at an accredited chemical laboratory and, following completion of the main investigation, ground gas concentration/flow monitoring was carried out.

Although UXO was not encountered during the investigation, Harrison advised the client that further work would be required to fully mitigate the risk before the site could be developed. So, after the main investigation was completed, Harrison worked with explosive ordnance contamination specialist MACC International to complete a full magnetometer survey of the development area.

The geotechnical investigation was completed safely and, while the UXO survey identified 137 buried ferrous objects, all of these turned out to be scrap metal that had been buried when the airbase was demolished.

The survey also identified the presence of a backfilled Stanton air raid shelter in the centre of the site. However, as this obstacle was identified in the early stages of the project, any unexpected design changes or delays during construction were avoided.

Results of the investigation enabled the client to proceed with construction, with a focused package of geotechnical data to inform the final foundation designs, without the risk of encountering buried explosives. 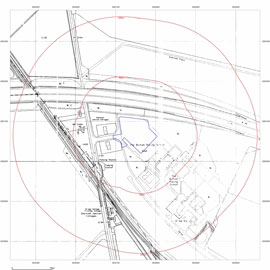